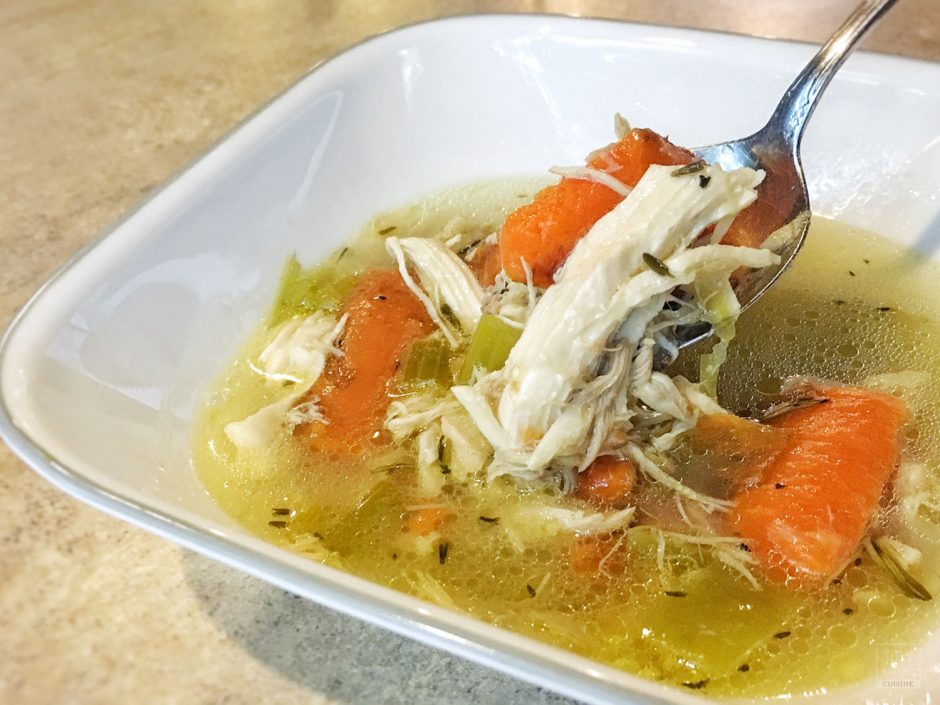 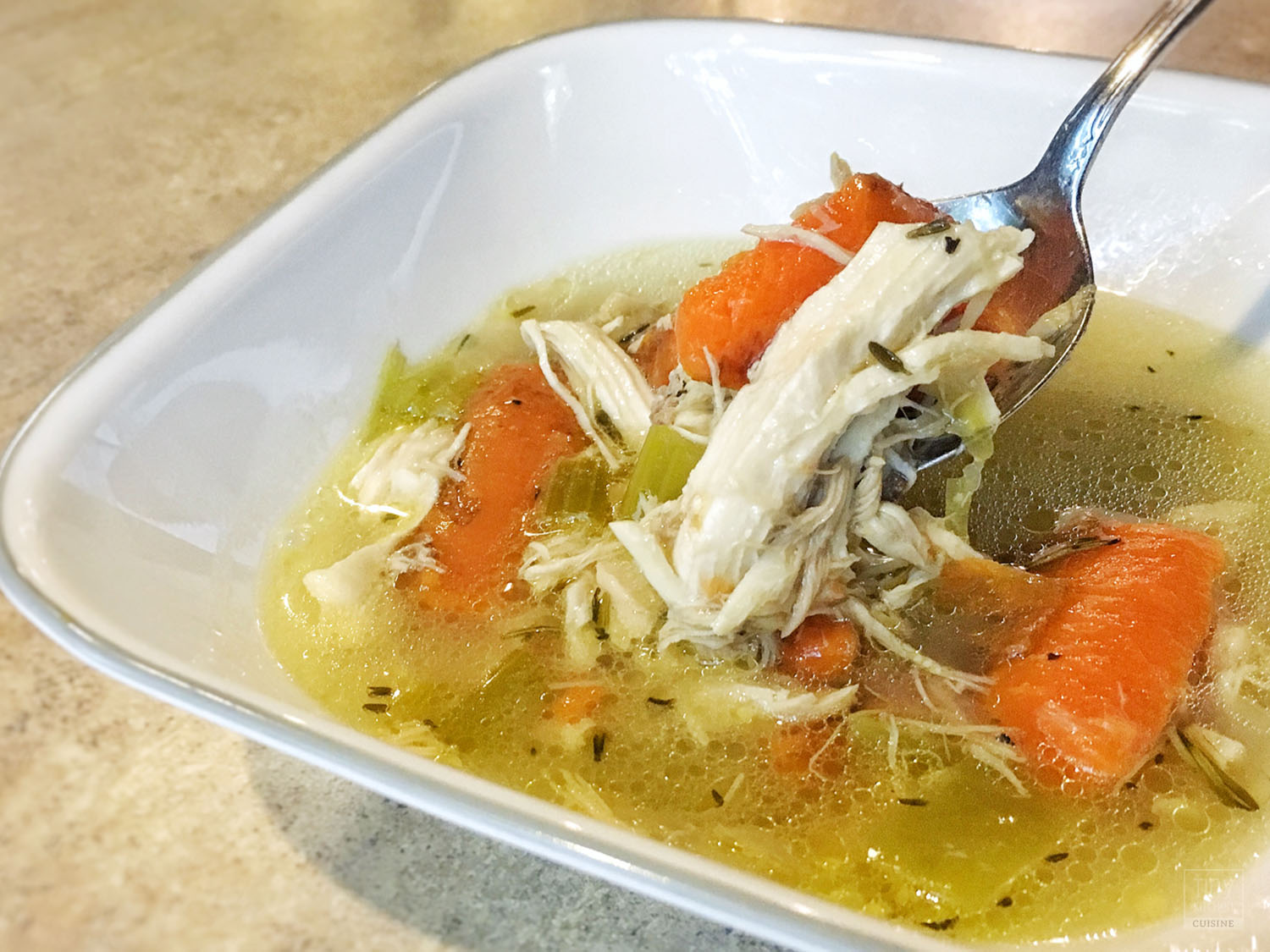 Chicken soup is said to be one of the most beloved comfort foods around the world; known as the cure for everything from the common cold to an ailing soul. Every type of cuisine has their own variation. This recipe is a simple, classic implementation that matches traditional recipes found in the United Kingdom.

No Room! Move Down!

In a large kitchen, you probably have access to at least one large stock pot. However, in most tiny kitchens, keeping even a single large stock pot can be a huge hit on your storage space. If you only have a small pot to work with, here a few techniques I recommend to make your life a little easier:

After simmering for an hour and a half, your broth will be a golden yellow. Of course, you could stop cooking it here… but bones are the gift that keep on giving. To make more soup than your pot allows, just pull as much broth as you can with a ladle and put it aside in a large bowl. Add more water and bring it back to a simmer for a second (third or even fourth) round of cooking. I’ve had great success doing this up to 5 times.

After the third time pulling broth, I grab some of the cooked vegetables and large portions of breast meat. Be careful. You want to make sure you leave all the bones in the pot. To keep my flavors bold, I then “refresh” the pot by adding a fresh round of vegetables, spices, and sometimes even more chicken along with the water. After each round of cooking, you’ll notice the broth becomes noticeably less yellow. Once it gets to only a light yellow color after cooking, I stop.

Cut Your Chicken Into Pieces

Sometimes you can’t get a chicken small enough to fit in your pot. Don’t be afraid to cut your chicken into pieces. Soup doesn’t care if the chicken goes in whole. When butchering your chicken, be very careful not to create bone splinters—they are very hard to find later on.

If you’re not into cutting up your own chicken, you can just buy it already cut up. Get chicken parts that still have the skin on and the bones in. Aim for a total of 3 to 4 lbs with a mixture of both bone-in breasts (for white meat) and bone-in thighs and legs (for dark meat).

As I mentioned before, after the third round of cooking broth, I like to also pull the vegetables and some of the chicken. What I didn’t mention was that’s around the same time we start to eat it. Seriously, it’s very hard to resist when you smell this delicious soup all day long. If you’re sick, getting as much fresh soup into your system as quickly as possible is the goal. 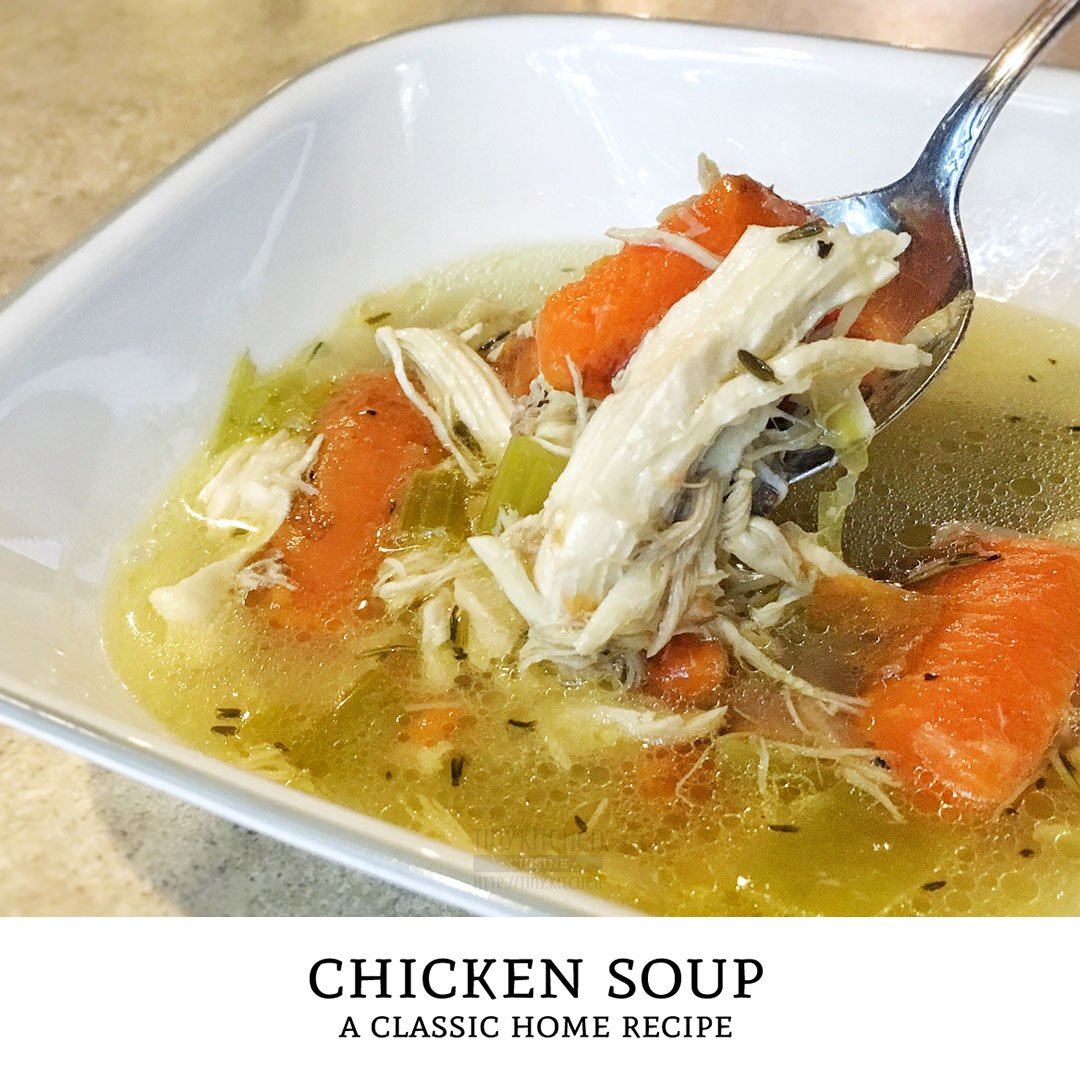 Chicken soup is not an easy meal to make in a tiny kitchen, but it can be done. It’s an extremely water intensive meal and literally takes all day to cook. You will be washing a cutting board, knife, soup pot, large spoon, ladle, strainer, bowls, and spoons. If you are making the soup in rounds, you’ll also have to wash the large bowl you used to squirrel away your broth. Is it worth it? Absolutely.

Homemade chicken soup will store refrigerated for about 4 days. Once it gets cold, you’ll notice that it turns gelatinous with a solid layer of fat on top. This is normal! It means that you have a nicely balanced, collagen-rich broth. When reheating, just put it all into a pot and heat it up. Do not add water. Your soup will have plenty of liquid once it gets hot again.

You can freeze extra soup in a freezer bag for 2 to 3 months. Thaw it just long enough to get it out of the bag, throw it in a pot, and heat it up. Because it’s a challenge to make in a tiny kitchen, it’s a good idea to stash away at least one bag out of every fresh batch you make. 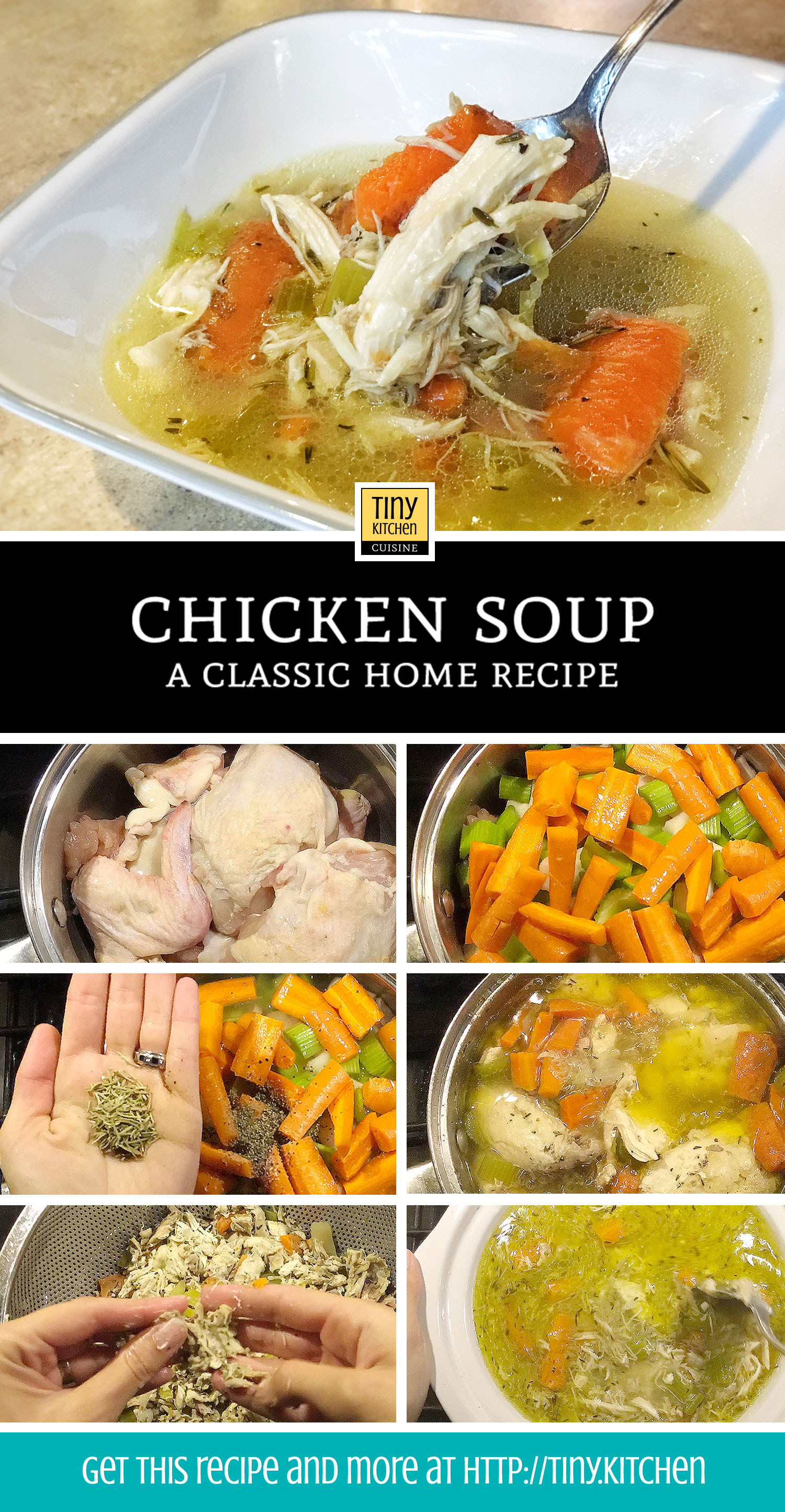