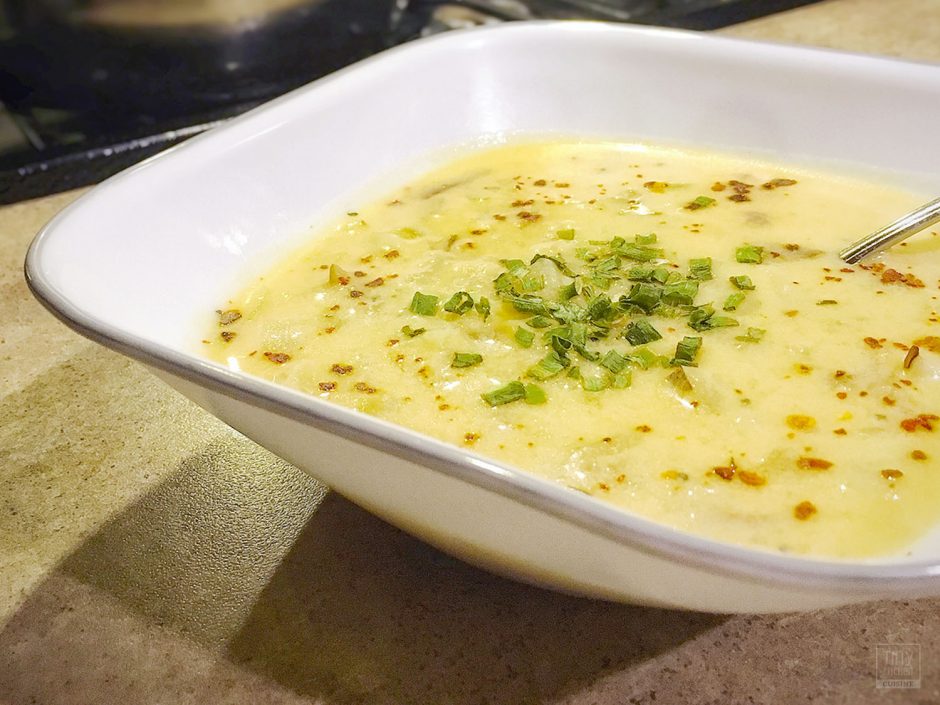 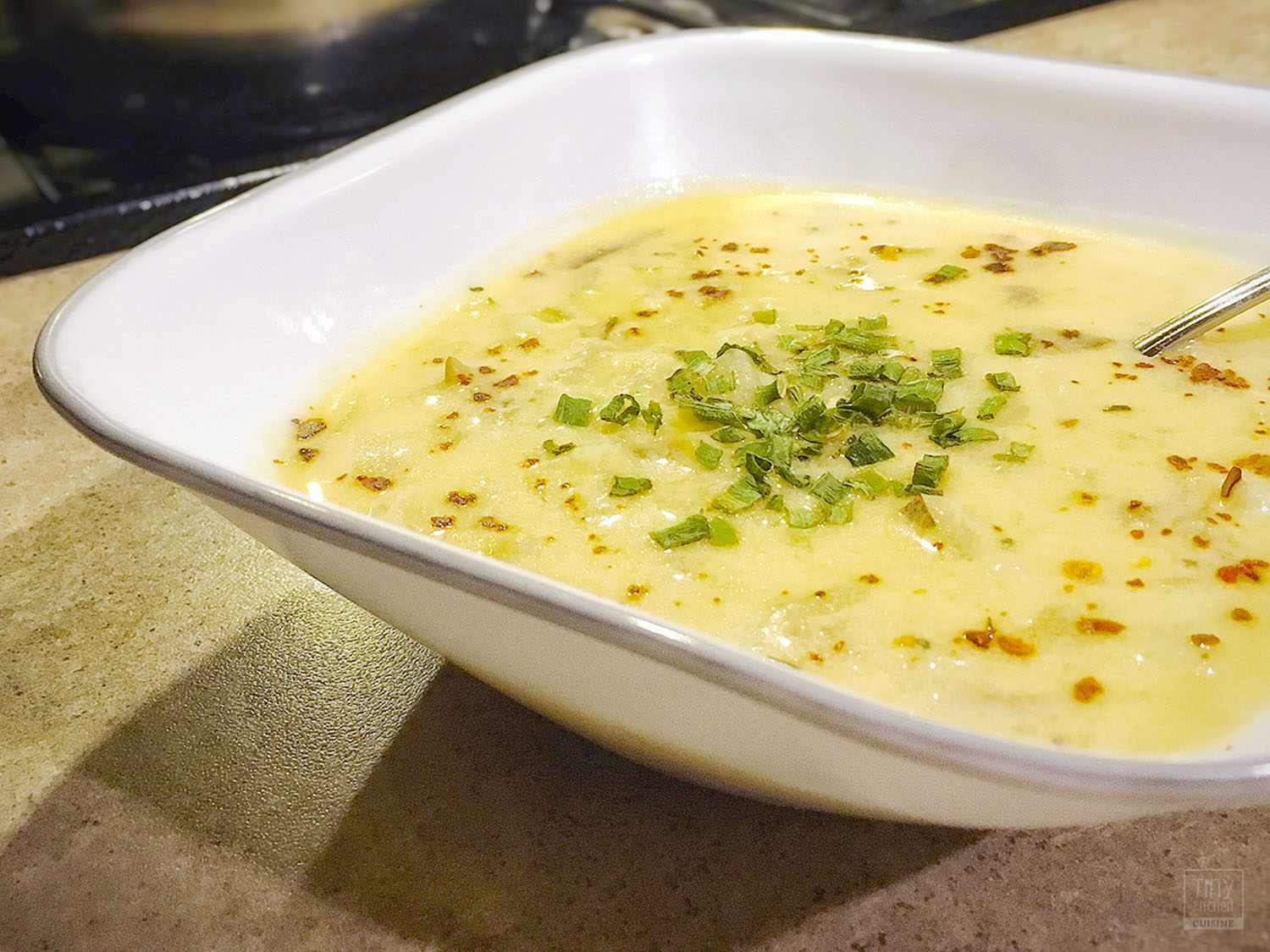 Potato Cheese Soup is awesome. As far as I’m concerned, it’s a concentrated bowl filled of comfort food. You get full, you eat cheese, you get a lot of great nutrients, it’s creamy, and (depending on how you make it) it can be spicy. Plus it’s so cheap to cook!

Finally, a vegetarian soup recipe that is filling!

I’m not a vegetarian, but I usually eat like one at home. I’ve found that most vegetarian recipes lack the ability to give you that “full” feeling when you’re done eating. It’s like Chinese food! It makes sense, you’re just gobbling up vegetables and those are usually pretty quick to digest. But sometimes you just want to feel full and this recipe will do just that!

There are a number of ways to make Potato Cheese Soup. Here, I am focusing on using simple vegetarian ingredients. But, if you’re not a vegetarian, you can easily replace the vegetable broth with chicken broth. Chicken broth will give the soup a slightly heartier flavor. I don’t think it makes that much of a difference, but maybe you do. Additionally, you can also top your soup with some bacon crumbles along with the chives. Loaded potato soup, anyone?

In our tiny kitchen, we swear by the Better Than Bouillon brand vegetable bouillon paste. It comes in tiny jars that store easily in our fridge, there are a variety of different flavors, and there isn’t a whole lot of junky ingredients. Maybe you want to make this recipe without bouillon though. No problem! Just substitute the bouillon and water portions of this recipe with 1 quart of vegetable broth (homemade or store-bought).

Because this recipe is my go-to “I’m so cold!” food, I personally like to bump up the spice levels. When preparing the vegetables, I chop up a jalapeño and add it along with some extra red pepper flake. As the soup cooks, the spiciness will permeate all of the vegetables which gives it an extra boost to its belly-warming powers.

You might not be able to handle the kind of heat that I can. Did I mention I used to participate regularly in spicy food eating contests? I did. I’m a proud pepperhead.

Tone it down a bit if you prefer by omitting the chopped jalapeño and red pepper flake. You won’t lose much in terms of flavor, but you will spare a sensitive mouth. 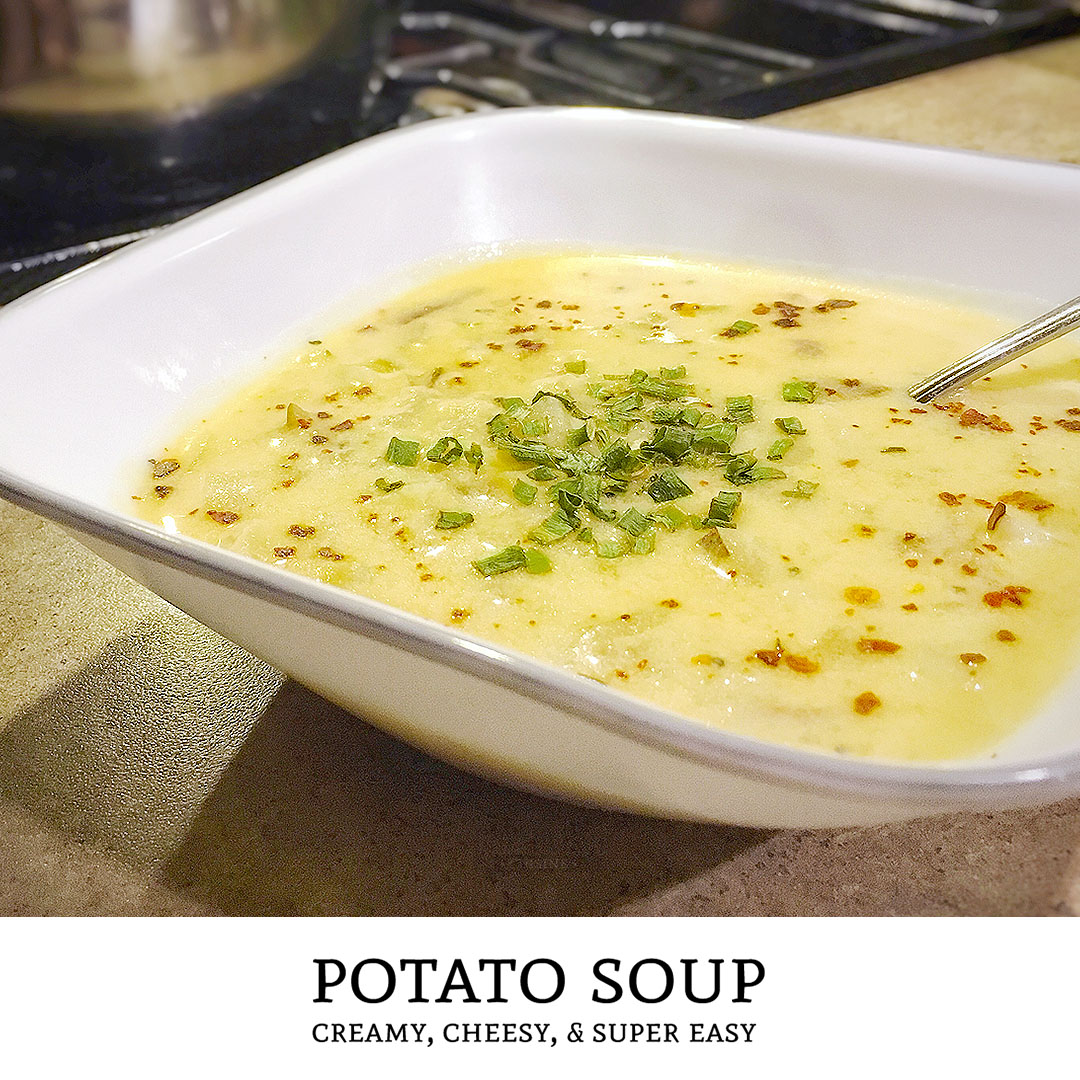 This vegetarian soup is super easy to make and it only requires a little bit of cooking on your stovetop. Washing the potatoes requires a significant amount of water to get them nice and clean. Use a bowl to catch the water and you can reduce your water usage quite a bit. If you’re in a tiny house or RV, you can also reuse the wash water later for your black tanks.

You can store this soup covered in your refrigerator for up to 3 days. When you want to reheat it, just stir in a splash of extra milk or half and half. I don’t recommend freezing it as the dairy content tends to get funky when frozen.

As for dishes, you will need to wash a pot, cutting board, knife, cheese grater, potato masher, ladle, a few bowls and some spoons. It may sound like a long list, but most of those items are small and clean up is not messy. Not bad for such a filling meal!